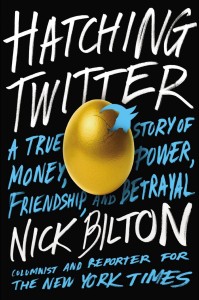 Hatching Twitter: Nick Bilton – I would call myself a bit of a Twitter addict/nerd. I love the service, and the power of it, not everyone understands the system and to me it’s still finding it’s feet in a very tech heavy world, but it’s starting to break through and show what it’s capable of. Having a soft spot for the service made this a great book for me to read, and it did not disappoint.

This books is not about Twitter as a product, but more on how Twitter was born and the struggles along the way of the four co-founders (Noah Glass, Jack Dorsey, Biz Stone, Ev Williams). The books is a focus on these four co-founders and goes into details of each of their part of the creation/ upbringing of Twitter as a tech start up and into a public company. The author Nick Bilton has had a great deal of access to the current and former Twitter staff, investors, and board, in order to put together such detail.

While this books reveals a lot of details you will never of heard about the early stages of Twitter, and the people involved, it may be enough for some readers to make judgement on the four co-founders, but to me it’s still missing a bit of information to make those judgements. As people say, business is very cruel, and this is a great insight in how a business conceived betweens friends can turn into a nightmare and each person thinking they are being treated unfairly. This may put some people of trying to create a business between friends.

On top of the backgrounds and the struggles between the four co-founders the books also gives you a glimpse into the world of the tech start up world (The whole “Silicon Valley” bubble), it has some very interesting parts to it, while this may not be how all start-ups are in there early stages, it could put a lot of people off trying to do a start up. While it may put some people off, it may also just cement the details of what goes on in a tech start-up in their early stages. While this is not the main focus on the book, I found it very interesting and wondered about what it was like for other tech companies that are a huge success now in their early stages. (We obviously know about Facebook form the movie “The Social Network”, but I would quite like to read more about this sort of stuff).