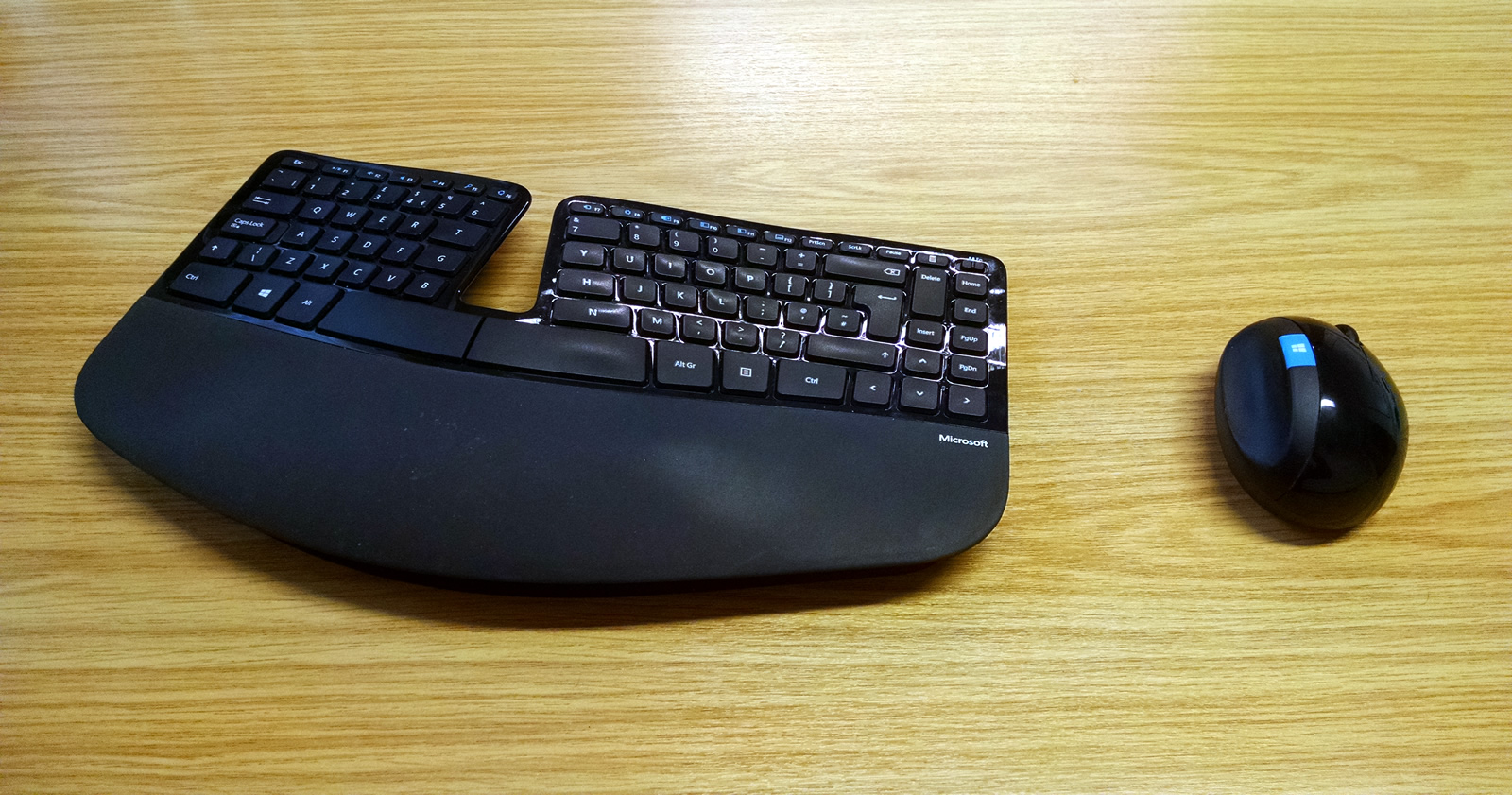 Just over a year ago I purchased the Microsoft Sculpt Ergonomic Keyboard and Mouse set, and by far it’s the best keyboard and mouse set I have used. When I say it’s the “best” I have used, obviously I can not vouch for ever keyboard and mouse on the planet, but for me after trying numerous different keyboards and mouse combinations I have finally found something I’ll struggle to move away from.

Over the course of my working life, from working at a computer/laptop on a daily basis I have tried many different sets. From working on desktop computers with multiple monitors then single a monitor, working on laptops solely, or laptops with a monitor or two connected, to using a laptop with monitor and keyboard/mouse combination, and many more other variations, over time I have tired tens of different set up.

Before I purchased the Microsoft Sculpt set, I was back to using just a laptop solely at this point, and this was causing some issues with my hands, and wrists. I would leave work and my hands and wrists would ache, and being me I would just carry on, and as I carried on tinkering in the evenings this was also increasing the aching pain. After some research it became apparent that the amount of keyboard use I was doing was the cause of the ache and pain, I knew that I needed to find a solution sooner rather than later to avoid any long term damage. I began looking around for a solution to help solve my problems. In the lead up to making the purchase of the Sculpt set, I tired a couple of different keyboards, mainly because I was not sure on splashing out so much on the Sculpt, in hindsight I would of saved myself time and money in just buying the sculpt first.

Another reason that I never made the purchase straight off for the Sculpt was that I had tried the wired keyboard version of the Sculpt (Microsoft Natural Ergo), and struggled to get to grips with it. Having grown up on computers I found the split keyboard just a little too strange. Having read a load of reviews on the sculpt it was ticking all the boxes, apart from the split issue, this is my health I was talking about so I decided to just go for it, and told myself that it can not be that bad to learn how to use it. One of the biggest selling points for me is I need quite a compact keyboard so the reach for the mouse is not so far, I prefer the mouse to site quite close to the right side of the keyboard to avoid the stretching of shoulder and back, and the sculpt was the only one I could find that was a narrow keyboard, and wireless.

Having used the keyboard and mouse for just over a year I am completely satisfied with my purchase, and when/if it packs in on me I will be purchasing the exact same set again in an instant! In the set you get get a keyboard, mouse and a separate numeric keypad. I’ve never once use the numeric keypad.

The first impressions I had when opening it, where a bit daunting as I was not confident that I could get used to using it. The mouse seemed to be huge! Compared to an Apple Mouse its double the height plus some, but after putting it on the the desk and putting my hand on it to use it properly, the size of it never really bothered me, the size of the mouse actually made it feel more usable and my hand sat in a more natural position. As the hold is slightly angled it does not force you arm to twist inwards as much this reduces the stress and forces on your arm.

For the keyboard I placed the extra support bar underneath, making the keyboard angle away from me. You can use it without this rest if you prefer, I’ve not used it without it for any great length of time, it feels more natural with the support bar. Using the extra support bar helps set your fingers over the keys in a more natural way, it makes you arms and fingers all straight from your shoulders down (you may need to adjust your seating position to help).

One thing I noticed from using this keyboard on a daily basis, is that when I travel with just my laptop, within a couple of days of laptop use I can start to feel the ache and pain returning in my hands and wrists. On one of my trips I decided to take the set with me which helped but it’s not exactly the smallest thing to be carrying around in your bag, and is prone to getting damaged. If I travelled much more I would invest in another one, but as it’s generally a week a few times a year it’s not too bad to cope with for the time being.